Should a Credible Designer Know HTML? 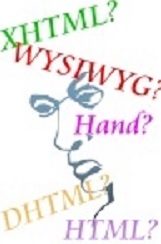 Any designer worth their salt is going to ensure they can produce any layout they have in mind from scratch by hand in a simple text editor like Notepad, the free editor available in Windows. "

All designers know that several WYSIWYG (What You See Is What You Get) web editor programs are available that they can use to design usable and attractive websites. From the beginner's Microsoft's Frontpage to the industry standard Macromedia's Dreamweaver, editor programs create HTML code for the designer. Web sites created with these editors are accepted as "professionally" designed even when software was used to actually write the code. The existence of these editors often leads new designers to assume that they do not need to actually know how to write HTML code. Yet, if they care whether they themselves are up to the current industry's standards, they will think again. Whether an editor is used or not, a professional designer will know the HTML code that would program a particular design idea. They may not actually choose to code it out line by line, but they would instantly know what the code would look like.

The ability to hand code a design in HTML (short for Hypertext Markup Language), both versions 3.2 and 4.0 is a basic critical expectation of any professional designer. In essence, HTML is a language with it's own syntax and grammar rules. Hand coding websites produces clean easy to load code, far superior to the heavy "nonsense" laden code produced by editors. It also gives you complete control of your coding as you proceed with your work. As well, you can ensure your code will be viewable by all browsers and computer platforms. Any designer worth their salt is going to ensure they can produce any layout they have in mind from scratch by hand in a simple text editor like Notepad, the free editor available in Windows. All web pages are written as ASCII text but published as .htm or .html files.

Who's Going to Know?

All professional designers can easily discern a hand coded page from an editor written one. One look at the source code tells the tale. There is a wave of consumer awareness going on right now that is helping potential clients learn how to choose a reliable experienced web designer. One important criteria is that the designer is comfortable coding sites by hand, preferably in any form of HTML from HTML 3.0 to DHTML. There are often so many errors and glitches left by editors that have to be corrected by hand that a savvy web consumer can easily spot a neophyte designer. The first place they are going to look is your own site. Is it hand coded or rendered by an editor? Does it comply with W3C guidelines? You may be able to entice some clients relying totally on an editor to design sites, but you're going to miss the big fish if that is the limit of your skills.

It isn't enough to learn how to hand code HTML. Designers also need to be cognizant of the guidelines for technically correct HTML. Once your incredible design is coded, it's time to validate it to make sure it meets industry standard. The World Wide Web Consortium or W3C offers an online page where you can do just that. Free Forn Natter also offers an online validation site that checks your site for conformity to the standards of the World Wide Web Consortium's (W3C) Web Access Initiative (WAI) as well as Section 508 guidelines from the Architectural and Transportation Barriers Compliance Board (Access Board) of the U.S. Federal Government.

It's Not That Difficult

Understandably, the world of HTML can be confusing in the beginning. Plus, it doesn't help that the standards keep evolving. The remaining four HTML articles in this series will attempt to simplify the various forms of HTML. We will begin with the industry standard since 1996 - version 3.2 then move on to the new and improved 4.0 which adds useful extensions to the former 3.2 version. Following that, an introduction to XHTML (The Extensible HyperText Markup Language) and DHTML (Dynamic HTML) will help you recognize and understand this extremely important language and all of its nuances. For now, it is enough for you to accept the challenge and learn how to write HTML. It will make all the difference in your web design career!

Posted by Nursing Informatics Learning Center on Monday, 10 May 2021